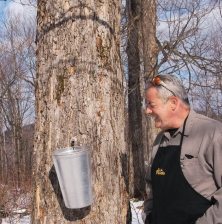 According to the Canadian government’s official website, in 2009, Québec produced 8.3 million gallons of maple syrup to Vermont’s 920,000. We may be the top dogs when it comes to maple in the U.S., but next to the Queebs we’re chumps.

Though official numbers may not back up the supposition, many would argue the same is true when it comes to maple meals. Sure, we have syrup-laced church suppers, and there are celebrated breakfasts at Branon’s West View Maples in Fairfield and Dakin Farm in Ferrisburgh. But for an intensely maple-driven meal, it’s worth packing your passport.

The competition is fierce to get dinner at a sugar shack. The Cabane à Sucre in St-Benoît de Mirabel — belonging to Montréal über-chef Martin Picard of Au Pied de Cochon — sells out its March-to-May dinners in August. Most other maple meals are packed weeks in advance. What’s the appeal? There’s sweet and there’s fat, and lots of it.

Only an hour and a half from Burlington, Cabane du PicBois (“cabin of the woodpecker,” to you Anglophones) is in Brigham, Québec, just off the beaten path near Cowansville, a biggish city packed with chain restaurants such as PFK (Poulet Frit Kentucky).

André Pollender and his wife, Danielle, began their sugaring business in 2000. Pollender is a cabinetmaker by trade, but he’s also in the fourth generation of a sugaring family. He says the hearty meals that he serves happened organically, after the couple issued dinner invitations to friends in their first season. Word of mouth, or what Pollender calls word “to God’s ears,” necessitated building a larger space — patterned after an antique barn — and taking reservations from the maple-hungry masses.

Diners sit at long tables, sharing bench space with strangers who quickly become comrades in cuisine. The meal begins when one of the elderly servers trudges over with the world’s smokiest pea soup. Chunks of veggies melt with each bite of the velvety potage, but it’s the mighty, meaty bacon that defines its taste. There’s warm bread — crusty outside and chewy inside — to mop up every drop.

For the main event, guests line up at the small but incredibly efficient buffet. There’s not a lot on offer, but there’s also not a lot anyone would turn down. Both salad and coleslaw get zest from Pollender’s prized invention: maple vinegar.

The vinegar’s power has won PicBois numerous international awards, televised appearances as far away as Japan and a coveted spot in the Créatifs de l’érable — an exclusive group of Québecois who skillfully showcase syrup in their cooking. Though he says his grandmother concocted a version of the vinegar decades ago, Pollender refined the process, aging his unpasteurized sap in oak and adding spices similar to those you’d find in apple cider.

This makes the salad dressing, served over mesclun, reminiscent of a balsamic vinaigrette, but with the compelling additions of cinnamon and cloves. The coleslaw is decidedly darker than mayonnaise-based versions — a more adult dish than the usual picnic fare. The cold bar also includes house-brined pickles. Don’t expect the usual mushy buffet beets: The ones here are al dente and gloriously balanced.

The pork parade starts with cretons, cubes of tender pâté that are the French Canadians’ nod to their continental forebears’ rillettes. These are just a warm-up for a barrage of meat that includes the most tender ham I’ve ever tasted (bathed in maple, bien sûr); maple sausages composed almost entirely of melt-in-your-mouth fat; rich, dark baked beans with more pork belly than legume; and oreilles de Crisse, or “Christ’s ears.” This last item, Pollender explains, is good, old-fashioned salt pork.

Why bring Jesus into it? According to Pollender, “When it fries, the popping and crackling is so beautiful it pleases Christ.” All the pork products come from Pollender’s cousin, who has a farm just large enough to keep the Cabane stocked with local meat for its short season.

On the nonmeat side, there are browned potato coins and a yellow loaf that turns out to be eggs. It has the texture of angel-food cake, which Pollender, whose wife concocted the recipe, says is achieved with soda water.

When dessert is over, he heads outside to the deck to prepare the Québecois version of sugar on snow. Using Grade A syrup — called “Number 1” in the Canadian grading system — that he has reduced almost to a paste, Pollender expertly dips Popsicle sticks in it, then quickly transfers them to a waiting bed of crushed ice. Unlike Vermont’s sugar on snow, Tire sur la Neige uses the frozen water as refrigeration, not sustenance.

Once the taffy-like substance begins to freeze, Pollender twists it around the stick, forming a makeshift lollipop, and hands each one off to a waiting child. The high-grade syrup tastes as much like caramel as maple, with a gloriously creamy texture.

After the meal, Pollender explains that such high-sugar, high-fat meals were originally concocted for hardworking sugarers and lumberjacks to sustain them and give them the energy to work harder.

What about those of us whose physical labor ends with putting fork to mouth? “You’re going to be on a sugar high all night,” he says with a laugh.

Please note that the online store is closed from January 1 to March 1, 2023. Thank you for your understanding. Dismiss